Home Resources Bitcoin Investment: Should you do it?

Bitcoin Investment: Should you do it?

Lately, we’ve had several questions regarding investing in cryptocurrencies, specifically Bitcoin. Cryptocurrencies have become a popular topic of late and they have seen a significant increase in mentions in the news and on social media. For the majority of people, 2017 is the first time hearing about Bitcoin and so naturally, questions arise.

The two most common questions I’ve received have been:

“Should I invest in Bitcoin?”

“Do you think Bitcoin is a good investment?”

We’ve also found that several questions from our clients are coming from their children who have asked them about investing in BitCoin. The digital currency is something that it lends itself to the younger generation and so we’re not surprised that we’re getting questions from people in their 20s and 30s.

A quick overview of Bitcoin

Bitcoin is a type of digital cryptocurrency that has been around since early 2009. In the last 5 years, it has seen significant spikes in interest as shown by the Google Trends graph below.

Bitcoin is not the only cryptocurrency, there are other types such as Ethereum, LiteCoin, Neo, Monero etc. and are often referred to as altcoins. The main feature of cryptocurrencies is that they operate on a decentralised peer-to-peer network, with no central authority or government backing.

In recent times there has been a significant increase in demand in Bitcoin which has seen the price increase dramatically, see the price history chart below.

The recent popularity of bitcoin. 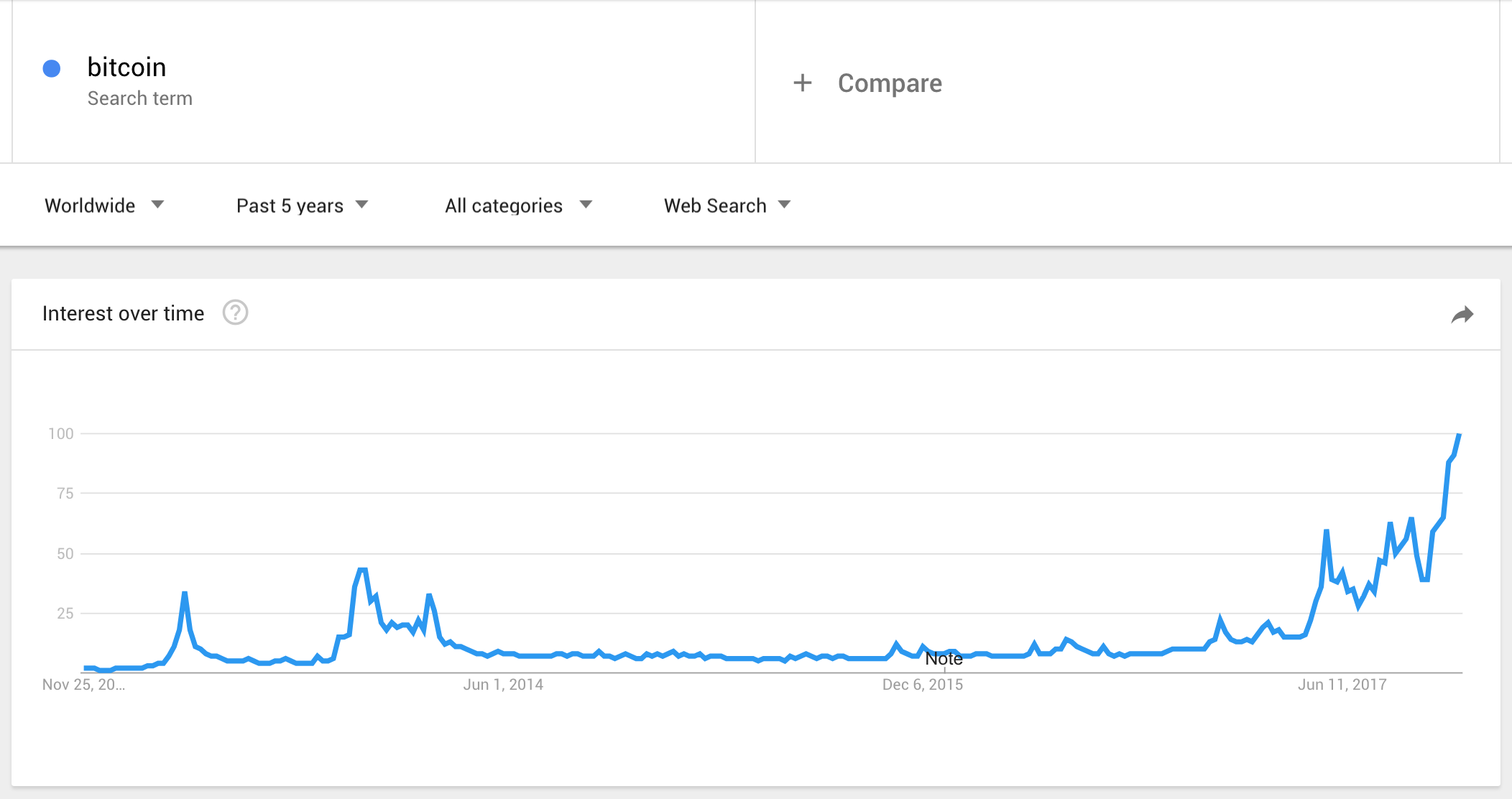 The recent price of bitcoin. 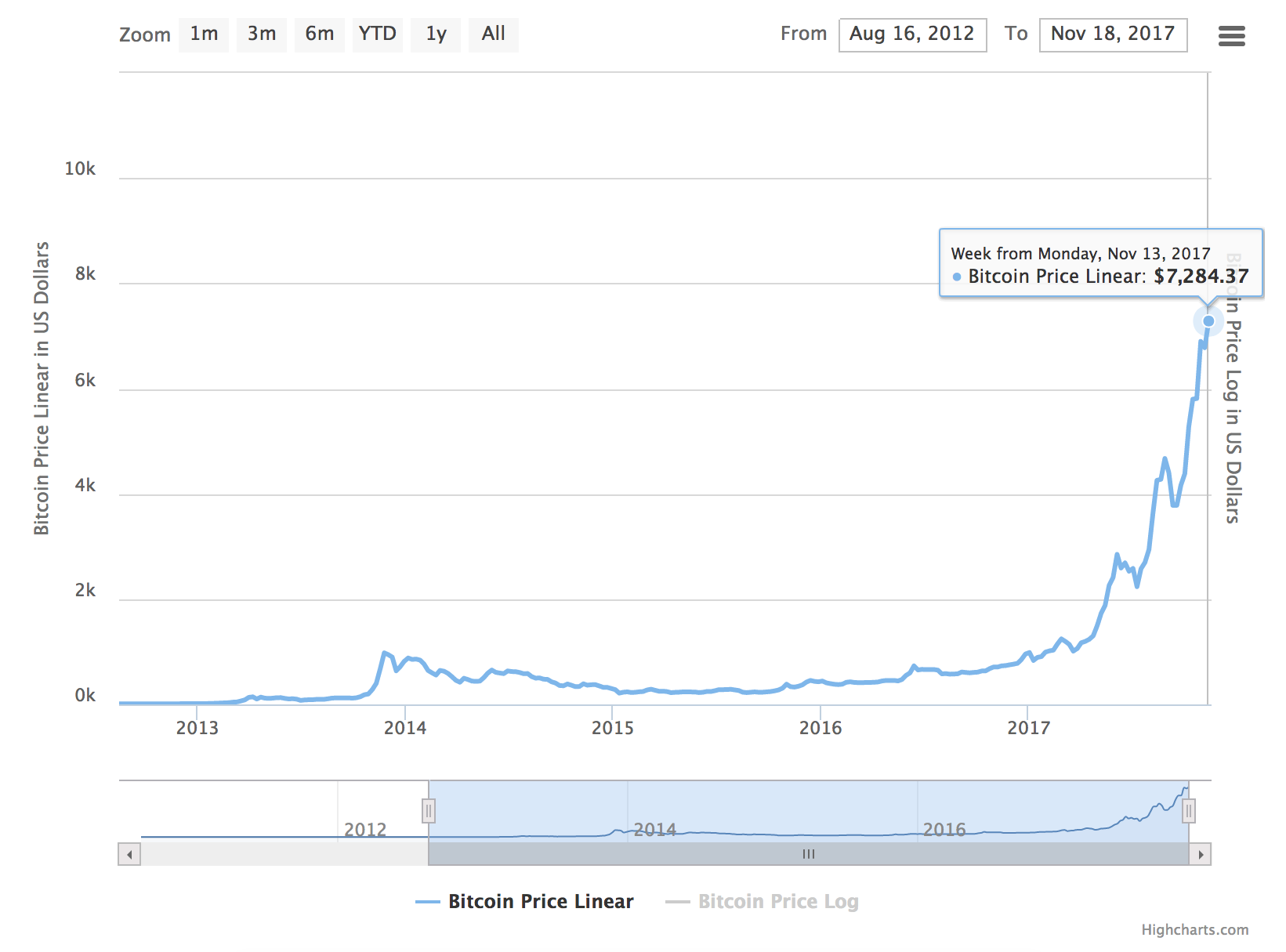 Investing in BitCoin and Cryptocurrencies

Together with the CARE Investment Committee, we have conducted comprehensive research for our clients on this topic. We’ve looked at different scenarios whilst considering our whole client base as well as the cryptocurrencies.

From our research, we’ve determined that — ‘investing’ in Bitcoin is pretty much speculation.

Another thing to consider when contemplating ‘investing’ in Bitcoin is what type of people are using it and other cryptocurrencies. At the moment, they are mainly being used by speculators as well as criminals. Which isn’t necessarily a place that you’d want to be in.

When I get to this point when explaining Bitcoin to my clients I always like to re-remind them about the definition of investing which is — where you buy something that will earn income.

As mentioned before, I believe ‘investing in’ or buying Bitcoin is speculating.

The definition for speculating is buying things that don’t earn income but hope that they’ll increase in value. This is the category that I believe Bitcoin falls into. It’s closer to gambling compared to investing and that it’s likely to end in tears if people aren’t prepared to lose.

But what about the blockchain?

The argument that I’ve encountered the most when it comes to those who are for ‘investing’ in Bitcoin is that it’s based on the blockchain technology and that’s why it’ll be a successful investment.

While blockchain is a valid technology that allows for an instantaneous exchange of digital currency it cannot guarantee the success of Bitcoin from an investment perspective.

You’ll sometimes see Bill Gates quoted as supporting digital currencies, but what he’s actually supporting is all currencies becoming digital, not just Bitcoin.
For those interested in finding out more about the blockchain technology I’d recommend reading this article.

So eventually, yes, we’ll be able to instantly transfer all currencies from one bank to another, and the blockchain technology will support that.

But as soon as that happens, all these digital currencies that aren’t backed by a government or a country will become obsolete, that is unless some body emerges to govern them.

Traditional currencies have a fixed quantity of issued currency (although governments can and do print more). This controls the supply and demand and ultimately the price or value of the currencies. At the moment, no one can tell who exactly controls Bitcoin and the issuing of it.

They say it’s only from the blockchain algorithms, but who’s going to stop people issuing more? There are a set 21 million Bitcoins to be mined and around over 16 million have been mined already. What happens when all of Bitcoins have been mined? Could the protocol be changed to issue more?

With breakaway currencies starting there will continue to be more and more cryptocurrencies in existence that will impact the price.

One of the main reasons for the original popularity of Bitcoin was the difficulty to trace purchases compared to traditional online transactions that made it popular with those on the dark web. Outside of that, there’s no reason for it to have escalated to the extent it has.

It is because of this that we recommend that our clients steer away from Bitcoin ‘investing’ as it falls towards the gambling/speculating end of our investment spectrum.

After I’ve discussed all of this with clients and they still wish to ‘invest’ in Bitcoin, I say that people should only play with money that they can afford to lose —  which is ultimately my definition for both speculating and gambling. Bitcoin and cryptocurrencies are new and can be extremely confusing to understand and if you aren’t prepared to put in the time to research the topic steer clear.

Another thing to consider when purchasing Bitcoin is the ability to sell the currency when you’d like. If you haven’t figured out a proper exit strategy then your money can be tied up in Bitcoin longer than you’d like. 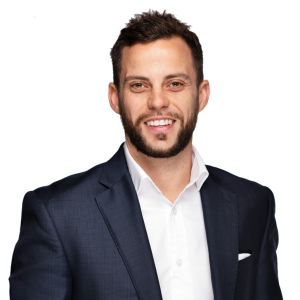 To your financial success.

If you’d like to discuss any potential investment options don’t hesitate to give the office a call on 07 3852 4114.

General Advice Warning
The information provided has been provided as general advice only. We have not considered your financial circumstances, needs or objectives and you should seek the assistance of your GPS Wealth Ltd (GPS) Adviser before you make any decision regarding any products mentioned in this communication. Whilst all care has been taken in the preparation of this material, no warranty is given in respect of the information provided and accordingly neither GPS nor its related entities, employees or agents shall be liable on any ground whatsoever with respect to decisions or actions taken as a result of you acting upon such information.

Whether you’re a first-time investor or already have a few properties under your belt, here is a quick look at...
18 February 2022

A Look Into the Investment Property Market in 2022

General Investing Property
READ MORE
Investing in property in 2020 in Australia has changed due to the impacts of COVID-19. Here's what's changed and how...
03 November 2020

Investing in Property: What You Need To Know

General Investing Property
READ MORE
This comprehensive guide to debt recycling will help you understand its benefits, downsides and how it can help you achieve...
20 January 2020

Your Comprehensive Guide to Debt Recycling

We hope this resource gave you a start in tackling the financial challenges you may be facing.

If you’d like guidance tailored specifically to you and your particular needs, we’re here to help.